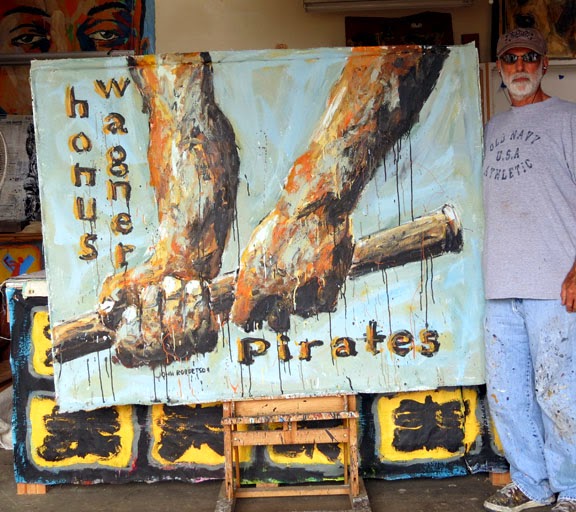 Painting of MLB Baseball player Honus Wagner's hands who was a Shortstop Pittsburgh Pirates.  Art is approximately 54” by 68” acrylic on unstretched canvas.
The Pittsburgh Pirates' Honus Wagner, a dead-ball era baseball player who is widely considered to be one of the best players of all time.  Most people know him as having the most valuable baseball card.  The reason it is so valuable is because it was recalled in 1909 and all were destroyed except for a few that got into circulation.

Here is an interesting story about the baseball card from Wikipedia, the Free Encyclopedia.  The most famous T206 Honus Wagner is the "Gretzky T206 Honus Wagner" card. The card's odd texture and shape led to speculation that it was altered. The Gretzky T206 Wagner was first sold by Alan Ray to a baseball memorabilia collector named Bill Mastro, who sold the card two years later to Jim Copeland for nearly four times the price he had originally paid. Copeland's sizable transaction revitalized interest in the sports memorabilia collection market. In 1991, Copeland sold the card to ice hockey figures Wayne Gretzky and Bruce McNall for $451,000. Gretzky resold the card four years later to Wal-Mart and Treat Entertainment for $500,000, for use as the top prize in a promotional contest.

The next year, a postal worker won the card and auctioned it at Christie's for $640,000 to collector Michael Gidwitz. In 2000, the card was sold via Robert Edward Auctions to card collector Brian Seigel for $1.27 million. In February 2007, Seigel sold the card privately to an anonymous collector for $2.35 million. Less than six months later, the card was sold to another anonymous collector for $2.8 million. In April 2011, that anonymous purchaser was revealed to be Ken Kendrick, owner of the Arizona Diamondbacks.[3] These transactions have made the Wagner card the most valuable baseball card in history.

In October 2013, Bill Mastro pleaded guilty to mail fraud in U.S District Court — and admitted in the process that he had trimmed the Wagner card to sharply increase its value.

Honus Wagner was an eight time National League batting champion, with a lifetime batting average of .328. He also led the league five times in stolen bases, five times in RBIs, eight times in doubles and three times in triples. He played nearly 2,800 games during his career, with 3,430 hits, 651 doubles, 252 triples and 722 stolen bases. Along with Babe Ruth, Ty Cobb, Christy Mathewson and Walter Johnson. If you want all his stats here is the link to MLB site on Honus Wagner

Honus Wagner’s Hall of Fame Induction Speech June 12, 1939.  .    “Ladies and gentlemen, I was born 1874, and this organization was started was 1876. When I was just a kid I said, “ I hope some day I’ll be up there playing in this league.” And by chance I did. Now Connie Mack the gentleman that preceeded me here at the mike, I remember walking fourteen miles just to see him play ball for . (crowd laughs) Walking and running, or hitchhiking a ride on a buggy, them days we had no automobile. I certainly am pleased to be here in today, and this is just a wonderful little city, or town, or village or whaever we’d call it. It puts me in mind of Sleepy Hollow. (crowd laughs) However I want to thank you for being able to come here today.”  Honus Wagner was one of the first five inducted into the Baseball Hall of Fame in 1936.