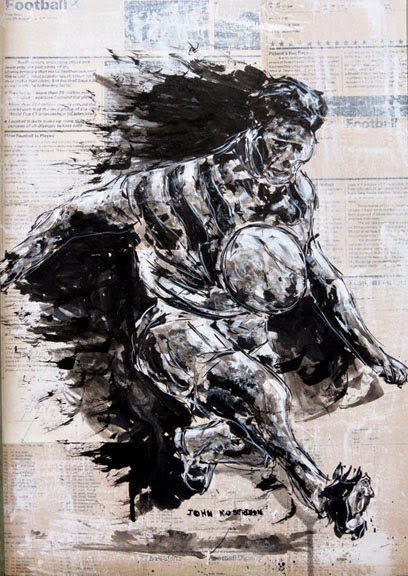 I did not want to be a footballer when I was a child, and with good reason - I  was born to early for the game in the .  As a boy nobody played it.  That was in the late forties.  Yes 1948.  Football was the LA Rams playing in the LA Coliseum.   Not World Cup Soccer.  There was little chance to flourish in soccer, as a sport at that time.

But that changed when my daughters were in grade school – and they started to play soccer.  On weekends their school had parent, teacher, student soccer games.  Everyone played and it was a madhouse.  But fun.  From that experience I found an interest in soccer.  I started following it a little bit and found more games to play in.

One thing I do the night before I played as game was to sleep with a soccer ball in the bed beside me.  My wife did not find that amusing.  She was very jealous of my football because, well, because she knew the next day I would be gone, sometimes with the girls.  And when I returned in the evening I was worn out from the experience.  But still, the night before the game I look at the football, bounce it around with my feet, even talk to it. This might seem brainless, but it gives me confidence. I talk to the football, I tell it to do it’s job properly by flying in the net for me.  Actually I was mainly concerned about tripping over the football or kicking it into the opponent’s net.

What I eventually figured out was that with the growth of soccer competition in the United Stated and, in particular, World Cup Football, many of us had been glued to the TV cheering our country on. And no matter what country you are rooting for, soccer is a sport that brings the whole world together. In keeping with the spirit of the World Cup, I decided to paint a few soccer inspired images from various photos from around the world.   I am just getting started but look forward to the challenge.  It is the start of something interesting for me and maybe the way soccer is going in the a greater interest in the sport.   And what is the most interesting position of a player to paint?   A striker.
Labels: European Football art Soccer Art soccer Painting Sports Art Sports Painting sports Paintings Soccer paintings Striker Striker paintings World Cup Football paintings