Labels
Posted by Unknown 8:00 AM 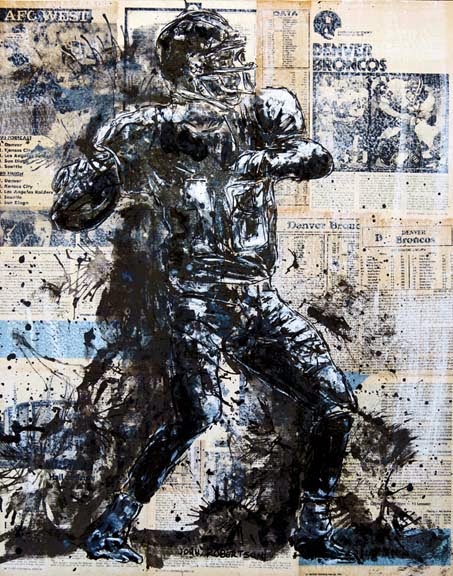 “Payton Manning  24” x 30” ink and acrylic on newsprint (Old Sporting News, magazines, books, etc) about the NFL/AFC West.  Image is Denver Broncos Payton Manning.  Newsprint attached to 1 ½”  stretched canvas.  To view paintings for sale please visit: John Robertson Sports Paintings for sale.
Payton is about the most competitive player to play the game.  As Adam Meadows said, (who played with Manning with the Colts,) "He lives, eats, breathes, smokes, snorts, chews football. ... "He's just a machine. That's all he wants to do."  Meadows was one of Manning's linemen for a few years as a Colt.  They had a close relationship of one that a quarterback would have with his linemen.  But one time Payton wanted to have Meadows around and talk about plays and watch game films.  Meadows ' wife was having their second baby and he needed to leave for the baby's birth.   Manning wanted to know why they couldn't have babies in the offseason.

What I always like about watching Payton Manning quarterbacking is when he comes to the line and is checking out the defense - the glancing around, the pointing of the finger, etc.  Dan Patrick in an interview with Payton Manning asked about his eye contact with defensive players.

"Patrick: Do you make eye contact with the defense? Is there a player you look at?

Manning: I check the middle linebacker, kind of come with that eye on him because you can see if he's cheating one way or the other. And then I'll find the two safeties.

D Patrick: But you'll look at them.

Manning: Yeah, I'll look at their eyes as opposed to their jersey numbers and it's like a second of staring. My first year, I didn't really do it quite as much. I was kind of scared they might, like, tell me to quit looking at them. But now I've gotten to the point where I look at them. Especially if they're a young player, I think it might make them a little bit uneasy."

All that review of films is what makes Manning the great quarterback that he is.  This philosophy can be applied to anyone who wants to be successful in their field - constant review and analysis of your previous actions and decisions.   Manning says,   "If you ever feel like that's not important -- like, 'Hey, I don't need to watch last season; I know what we did; I know what I did wrong' -- no, you don't know," Manning said. "You need to watch it. Watch the bad plays. It's not fun to watch bad plays, to sit there and say, 'That's a bad decision' and 'That's a really bad decision' and 'Horrible read.' ... No matter how old you are, you need to go into that prepared to be constructively criticized and learn how to grow out of the mistakes every year."

One of my favorite lines that Payton Manning reportedly said according to writer Michael Silver of Sports Illustrated was prior to a Super Bowl a few years ago.  The Colts had banned hotel-room visits from relatives and friends the week before the game. Manning said during a team meeting, "I don't want any crying kids next to me while I'm trying to study,"

If you are a football nerd and want some great insightful information and detail (more than any normal fan would want to know) in how Manning has run an offense here is a great article about it by Chris B. Brown ..." a return to the simplicity of Peyton Manning..."