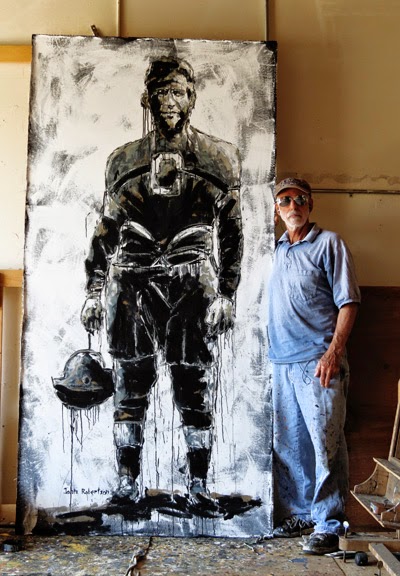 I have no idea when Jim Thorpe showed up in my conscientiousness.  But he seemed to always be there.  I am sure it had to do with my step-father who loved football. In my youth we used to go to the old LA Rams games at the LA Coliseum in 1952 -53 to see quarterback Bob Waterfield, and Elroy “Crazy Legs” Hirsh, and my favorite of all nicknames for a football player, Dick “Night Train” Lane.

I am sure my step-dad told me the stories that most people heard about Jim Thorpe  - winning the gold medal in the pentathlon in 1912 Olympics, crowned by the King of Sweden as “the greatest athlete in the world.  In which Thorpe said, “thanks King.”   This is what Thorpe said about track and field;   "...Track and field, because it was something I could do by myself, one-on-one, me against everybody else." And then my step-dad would go one about Thorpe’s college football career at and becoming an All American in 1912 and 1913.  He played professional football for seven different teams and signed with the New York Giants baseball team in 1913.  He had different feelings about playing college football and professional football.   Thorpe said, "[T]he college game...brings out that something which is lacking in the pro game--I guess you could call it spirit. The college player...will willingly sacrifice his leg to gain the necessary yards that spell victory for his team. That's spirit. The professional gridder will play it safe, because he wants to be in condition to earn more money in his next game. That's business."  There were years he played in both pro sports of football and baseball at the same time.  And then the bad news came that he had played sports for money during the Olympic years and was stripped of his medals.  As Thorpe said about it, " "I went to play baseball in for a couple of summers and paid for it the rest of my life."

As I loved to play sports, particularity football I knew his story well. We always thought of Jim Thorpe as the great football player from his success at Carlisle Indian Industrial School.  (as an aside:  The link is to the Wikipedia information about and very interesting - about early turn-of-the-century college football and Indian affairs)   I, like a lot of boys wanted to be a football player.  This was long before there was any real organized football for children.  (We were called children then, not youth.)  So we got shoulder pads and helmets with Ram colors and insignia and banged into each other on the grass and sidewalks in front of our houses.  In those days the helmets had one single bar in front of the face so it was easy to catch an elbow or knee into the face.  Sixty years have not erased some of the scars.

Jim Thorpe was eventually inducted into the Professional Football Hall of Fame in 1963 in the inaugural class of 17 athletes.  Grantland Rice, a legendary sportswriter said that Thorpe was the greatest football player ever.  It wasn’t because he was the best at any particular aspect of the game, passing, running, tackling but that he was really good in all of them making for a great, all around football player.