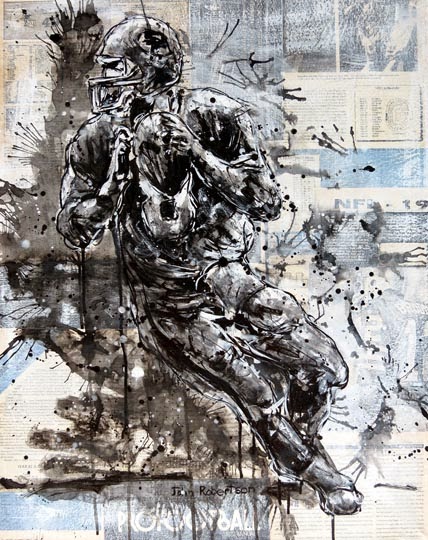 During his NFL career, Steve Young the left-hander threw for 3,000 or more yards six times and had 20 or more touchdown passes in a season five times, and posted a passer rating of 100 or higher six times.  Aside from his passing ability, Young was a constant threat as a runner.  He ran for 4,239 yards and scored 43 rushing touchdowns. –

Young was named the MVP (Most Valuable Player) of the NFL twice in 1992 and 1994, and the MVP of Super Bowl XXIX. All-Pro four times and named seven times to the Pro Bowl. Young also won a record six NFL passer rating titles.

Young is also member of the College Football Hall of Fame and the Pro Football Hall of Fame. At the time of his retirement, he had the highest passer rating among NFL quarterbacks who have thrown at least 1,500 passing attempts (96.8), and is currently ranked third. He is also still ranked highest amongst retired players.

Funny story Steve Young told at his induction speech to theFootball Hall of Fame.  “Ironically it was my mom who kicked off my football career with a bang as she charged the field when I was 8 years old. She was upset that another kid had neck tackled me and knocked the wind out of me. She knew that neck tackling was illegal and since no penalty was called she felt it imperative to rush the field and help her little boy. I was scared to death as I saw her sprinting across the field, with good speed I might add, assuming she was coming to give me a kiss or something. Imagine the visual: late 1960's—20's aged woman, lady, in a dress, on a football field, purse on her shoulder, big sunglasses, high-heeled shoes aerating the field. In horror, she passed by me and grabbed the kid from the other team. Adrenaline pumping, she picked up the boy by the shoulder pads and told him that the hit was illegal and that he better not do it again! Mom, now you know why we never gave you any field level tickets over the last 17 years. My greatest cheerleader.“

Here is an interesting comment by Steve Young about his seven concussions he suffered before retiring in 1999.  The interview was on PBS FRONTLINE.  Young told FRONTLINE he worries about the toll that routine head hits are taking on linemen and running backs. This is the edited transcript of an interview conducted with FRONTLINE’s Jim Gilmore on March 27, 2013.

Jim Gilmore: “One last thing on the way you played and stuff, and it says something about the intensity of how players play. Your rep was always that you would refuse to be taken out of the game, that you would be basically ready to go back, sort of hide from the coach and whatever and be ready to go back on the field before a replacement or anything else.”

Gilmore:  “What was that all about?”

And that's what, as we get into concussions, that's the nefarious nature of concussions, because you can have a bad knee and the doctor looks at it and they watch you run and everyone has 100 percent knowledge. You might say, "Oh, I feel this way." If you can run, if they can tape it up and you can go, then you can [play], and the doctor can see stability. We know what we're dealing with, and now we can kind of generally take a pretty good assumption of the risk.

As a player, that's why concussions are so difficult, because even the experts, even the people that you say, "OK, am I OK?" "I don't know. How do you feel?" You know, it's a really tough one.”