Labels
Posted by Unknown 6:30 AM 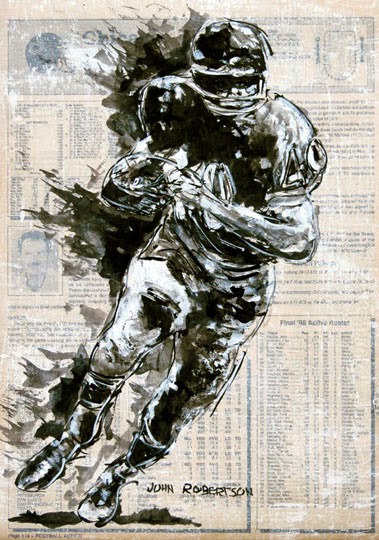 Gail Sayers said, “"give me 18 inches of daylight that's all I  need", which meant that all the offensive line had to do was to open up a small hole in the defensive line for him of 18 inches and he could squeeze and zig-zag through for some good yardage.  Mike Ditka, who played for Chicago and later coached the Chicago Bears for 11 years and New Orleans Saints for three years said of Sayers, “if you’re talking about making people miss and cutting back, nobody was ever better than him.”  Dick Butkus, the great linebacker who played with Sayers (and one of my all time favorite players) said of Sayers “He had a great ability to come at you and then…he’s gone.  He was something to play with.  I’m just glad he was on our team.”

Gail also known as "The Kansas Comet" was a running back in the National Football League (NFL) for seven seasons during the 1960s and early 1970s. He played college football for the , and was twice recognized as an All-American. He was a first-round pick in the 1965 NFL Draft, and played his entire pro career for the NFL's Chicago Bears.  Selected to the Pro Bowl four times (1965, 1966, 1967 and 1969) and five times in consecutive All-Pro (1965, 1966, 1967, 1968 and 1969), he is part of the College Football Hall of Fame and the Pro Football Hall of Fame since 1977. His number 40 was retired by the franchise of the Chicago Bears. It is also part of the NFL team of the 1960s and the team's 75th anniversary of the NFL. His friendship with fellow Chicago Bear Brian Piccolo was the basis for the 1971 movie Brian's Song. During his seventh season in , Sayers suffered a career-ending knee injury. He retired from the sport in 1972

George Halas,was the iconic founder and owner of the National Football League's Chicago Bears.  Halas didn`t believe in starting rookies, but with Gail he felt a little different and Sayers delivered.  In his first heavy pre-season action, he raced 77 yards on a punt return, 93 yards on a kickoff return, and then startled everyone with a 25-yard scoring pass against the Los Angeles Rams. –Sayers' records include most touchdowns in a rookie season,  (22 in 1965).  Also in Sayers record book he had the most touchdowns in a game (6, tied with Nevers and Jones), highest career kickoff return average (30.56), and most return touchdowns in a game.

Gail Sayers said, “There's no way I would have made the Hall of Fame or set any of the records I did by myself. No matter how many yards I gained, whether it was three or 300, someone had to be there to make the block.

Here is a portion of Gail SayersHall of Fame speech, July 30, 1977, that I like best, “God gave me a great gift and I had a lot of help developing for this occasion. Reaching this point, however, is not as important as striving to get here. This is true in all professions and all of life's activities. There are doctors, lawyers, schoolteachers, plumbers all who strive to do their very best with their abilities. We hear a lot today about how the American people have lost their dedication to excellence. I don't believe that is true. Each  of us excels at different things, sometimes in areas that are only a hobby, more often in our life vocation. The most important thing, however, is to strive to do our very best. Nothing is more of a waste than unrealized potential. Sometimes failure to use one's talents to the fullest is often the fault of the individual. Nothing could be more tragic. I am sure many of you have been to a Special Olympics and if you have, I am sure you have felt the same exhilaration I have felt in watching young people with disabilities strive as hard as they can in various events. The sense of satisfaction they get from striving is to them much more important than where they finish in the competition. As Robert Rawlings said, 'A man's reach should exceed his grasp'. It is describing to reach a goal that is important and if you should reach that goal, set new goals and strive for them.”

A Friend In Deed.  While at his first training camp, Sayers met fellow running back Brian Piccolo. The two became close friends and were the first racially mixed roommates in the history of the Bears. After cancer brought Piccolo’s life to an untimely end, Sayers’ book documenting their friendship became the basis for the TV movie "Brian's Song" starring James Caan and Billy Dee Williams. The film won the 1972 Golden Globe Award as the Best Film Made for Television and spawned a cult following that has persisted for almost three decades, and even resulted in a remake by Disney and ABC-TV in 2001.

After all is said and done about Gail Sayers, this is my favorite quote of his, ""Football is a very short-term proposition. Football really prepares you for nothing. The only thing I got out of football was the ability to work hard, and that's it."
Labels: Chicago Bears Chicago Bears painting Football Art Football Painting Gail Sayers Gail Sayers painting NFL NFL player painting The Kansas Comet