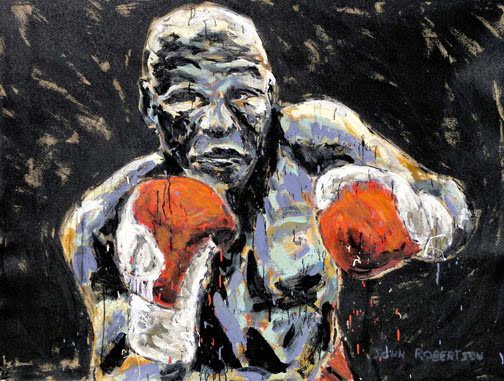 I had painted this image of Floyd Mayweather Jr. a couple of years ago and it probably is posted on this blog - but I thought  I would post it again because of his unanimous decision over Marcos Maidana in their WBC welterweight championship  fight a little bit ago.  At thirty-seven Mayweather is still going strong.  He remains unbeaten in 47 fights.  Tough to argue that he is not one of the great fighters.  The boxing art image of Floyd Mayweather Jr. is 4 feet by 5 feet, acrylic on unstretched canvas.  To view paintings for sale please visit:
John Robertson Sports Paintings for sale.

I’m not sure why I never really understood what boxing means.  The loneliness of the fighter in the ring, the sweat and smell of the fighters, the grunting and groaning, the grappling and the punching just inches away from each other.  It is about as basic as it can get.  Primitive.

When I was a boy with my little baby face, I watched The Pabst Blue Ribbon bouts on Wednesday, Gillette Friday Night Fights and Saturday night fights with my father on a black and white TV.  We watched a lot of fights – some of the great ones.   There was the legendary Sugar Ray Robinson,Rocky Marciano, Jersey Joe Walcott, Archie Moore (my favorite but hated his fight with Ali), Ezzard Charles, Joe Louis and Floyd Patterson.  Some of these guys lasted into the 60’s.

At the time, all I could see was that two men trying to hurt each other for no reason that I knew of.   I didn’t know about the money, the power over someone else, or that the pure love of fighting were reasons to fight.  I didn't see the discipline and control.   I didn’t understand what it meant to a fighter who was blasted into the ropes, knocked there by a combination of devastating jabs and cross hooks. And as he crumbles to the canvas how his great goal was coming to an end.   As Mike Tyson said, “Everybody has a plan until they get punched in the face.”

And what else I learned is what is so contrary to our basic, primitive instincts - that to be successful as a fighter you have to step into it.  Maybe that is why I found it so captivating – the ability of a fighter who may be under a barrage of punches to the face, to lean in, to step in, instead of backing away from the assault.  Because that is the life lesson I take from watching all those fights with my father.  You have to stick your face out there.

Floyd Mayweather Jr. quote which should apply to everything we do: “I approach every fight like it’s my last fight.”

Floyd Mayweather Jr.  is currently undefeated as a professional and is a five-division world champion.  Super featherweight, Lightweight, Light welterweight, Welterweight, and Light middleweight.  He has won ten world titles in the four different weight classes. EPSY has awarded Mayweather Best Fighter ESPY Award in 2007, 2008, 2010, 2012, 2013 and 2014. Mayweather is a two-time Ring magazine Fighter of the Year (winning the award in 1998 and 2007); he also won the Boxing Writers Association of America (BWAA) Fighter of the Year award in 2007.  Nicknames: Pretty Boy