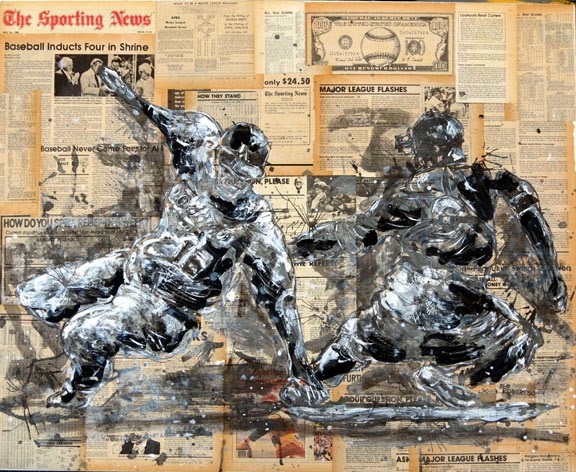 The baseball painting is of Los Angeles Dodger outfielder, Andre Ethier sliding into home plate as the catcher tries to protect the plate and tag Either out.   32” x 39”  ink and acrylic on newsprint (Old Sporting News, magazines, books, etc) about the MLB and image of LA Dodgers.  Newsprint attached to 1” stretched canvas.  To view paintings for sale please visit: John Robertson Sports Paintings for sale.

Andre Ethier is a MLB left-handed outfielder for the Los Angeles Dodgers.  He’s a he’s a 2-time All-Star with a Silver Slugger and a Gold Glove in his history.   Andre does have an interesting ritual before every game—ever since he was in the minors—he eats a peanut butter and honey sandwich on wheat bread and two spoonfuls of tuna.  One of the interesting things Ethier has said about himself is, “I wasn't an all-American, and I wasn't drafted until the second round. I wasn't that guy everybody said to watch out for the next couple of years because I was going to make a big impact. I guess that lights a little fire under you and makes you want to show what you can do.”

Ethier has played his whole major league baseball with the LA Dodgers.  He did start in the farm system but he’s never did play in the Major League with and started with the Dodgers in 2006.

There is something valuable in a player that has only played for one team. They seem more real, not a rent-a-player, moving from one team to another.  They care more about their own team.  In his eight years with the Dodgers he has seen the good, the bad and the ugly – the success in October and the failures that can start in the July’s - and the seasons with the injuries.

Because he has been able to perform under pressure he was given the nickname “Captain Clutch”.  In one season he had six walk-off hits which included four walk-off home runs that tied the Major League record for most in a season.  When asked about it in a Sporting News interview he said, “It’s one of those funny things. People understand that I’m pretty intense when I go up there, pretty focused and locked in; I can have that tight, whiteknuckled- grip look to me. I wasn’t that good in those situations early in my career; I was awful in those big, game-changing at-bats. I think I established that you can learn to become good at that but it takes a certain easiness and calmness to do it. There’s nothing better than having a feeling going up there: I want to be in that situation; I can’t wait to get that at-bat. Then you hit the ball and you look as you run around the bases—you just ended a game like that with one swing. It’s a great feeling. You’ve got to want to be in that situation because a lot of times you’re going to fail. But it’s what you look for. If anything, I’ve shown that I’m able to handle that situation and come through.”  A couple of his accomplishments:  He broke the Dodger record for most consecutive at-bats with a hit. He’s the only Dodger to have more than 30 doubles in six consecutive seasons.

There has been some question about Ethier batting against left-handers.  In a GQ article Andre addressed a the question asked by Nathaniel Penn :  “Against right-handed pitchers, your numbers are spectacular. Against left-handed pitchers, you've struggled throughout your career. This spring your manager, Don Mattingly, had to defend you and affirm that he's not going to platoon you this season—i.e., bench you when the Dodgers are facing a left-handed starting pitcher. At this point in your career, how do you go about improving your ability to hit lefties?

[This area] is one where I think more than anything this spring we—I mean me and [Dodgers hitting coach] Mark McGwire—have been working really hard. Nothing mechanical, just more the mental side: visualizing and making ourselves better and really figuring out a way to just be confident in all situations.

Sometimes as a baseball player or just an athlete in general you stick to the things you do well and you keep practicing those things. Those areas where you have issues you try to fix 'em but at the same time you try to limit your exposure to those. But in baseball you gotta go up there and face everyone in every situation. I think it's a thing where now lefties are coming out of the bullpen earlier in the game to face left-handed hitters. There's maybe two lefties in the bullpen that are there every day just to try to get you out when those big at-bats are coming. You gotta learn those guys; it's just how the game's really been evolving.”
Although he is not having his best offensive season he does have a good perspective on his play.  Andre said, “I just want to take advantage of every day that I'm in the lineup.”
Labels: Andre Ethier Baseball Art Baseball Painting baseball slide catcher protecting home plate Los Angeles Dodgers Major League Baseball painting MLB Outfielder sports paintings