Labels
Posted by Unknown 6:00 AM 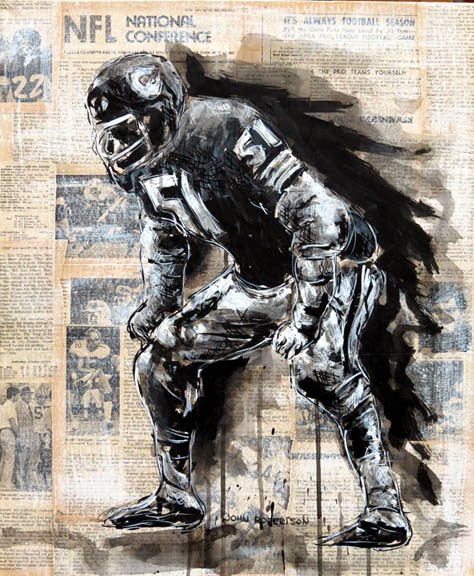 I Think I have painted or drawn Dick Butkus of the Chicago Bears five times.  As I have said before, he is one of my all-time favorite players.  A great number of years ago I was in a lumberyard in (The old Malibu Lumber, on ) and I turned to see who the guy next to me was (in there is a good chance for celebrity sightings)  Lo and behold it was Dick Butkus.  I slobered all over him, telling him how much I had enjoyed watching him play.  He asked if I had seen him on the silver screen..  I said I did not find watching him act quite as enjoyable but I did like him in those old in Miller Lite commercials. (Probably way before your time)

Dick Butkus graduated from the where he was a two time All- American line backer. A first round draft pick of the Chicago Bears, Dick played for them from 1965-1973, and was named All-Pro linebacker seven times. Mr. Butkus was elected into the NFL "Football Hall of Fame" at in 1979. Many football garu's consider Dick Butkus the finest line backer in the history of football.  The Chicago Bears retired his uniform number 51.

He had a group of different nicknames:  “The Robot of Destruction,”  “The Maestro of Mayhem,”  “The Enforcer,” and “The Animal.”   Arthur Kretchmer in his article “Butkus:One Season And One Injury With The Meanest Man Alive” says, when speaking to Butkus,  "Dave Meggyesy, the ex-Cardinal, says that football is so brutal he was taught to use his hands to force a man's cleats into the turf and then drive his shoulder into the man's knee to rip his leg apart. That ever happen to you?" Butkus’ response; …"Hell, no! All you'd have to do is roll with the block and step on the guy's face."

I lke his closing lines to Dick Butkus’sHall of Fame induction speech.  There is something very humble about it.  “I consider being inducted into the Pro Football Hall of Fame as the top of my dream. For only on the top can I see the whole view. And I can now see what I have done and what I can do from now on. I have a new vision and a new goal now and that is simply to be a better husband and a better father and a better person. Along with the other enshrinees, I will always try to be a proud representative of this the Pro Football Hall of Fame. Thank you very much.”
Labels: Chicago Bears art Chicago Bears painting Dick Butkus Dick Butkus painting Football Art Football Painting linebacker