Labels
Posted by Unknown 5:00 AM 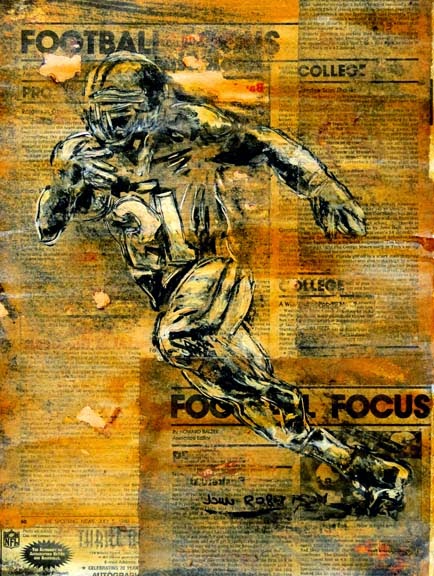 Deon Sanders painting  12" x 16" ink and acrylic.  The background is newsprint (from old Sporting News, newspaper about baseball) attached to the canvas board.  The paper is then distressed to give it a old and beat-up, used look.  To view paintings for sale please visit:
John Robertson Sports Paintings for sale.

Deon Sanders was a star cornerback who played 14 NFL seasons from 1989-2005.  Sanders Played for a variety of NFL football teams and used both # 21 and #37.   He was sometimes called "Neon Dion" because of his flashy style on the field and in his personal dress code. Sanders once said, "I never wear the same shoe twice." As a continuation of his thoughts about being flashy he said, "“If you look good, you feel good, If you feel good, you play good, If you play good, they pay good.”

Sanders played football primarily at cornerback, but also as a kick returner, punt returner and occasionally as a running back or wide receiver.  Emmitt Smith, Dallas Cowboys Hall of Fame running back and Sanders' teammate from 1995-99 said about him,  "You don't get to this level by not performing. A lot of guys play the game, but when you start looking at his performance and what he's been able to accomplish in the period of time that he played, you know he shut down one side of the football field. That says a lot about an athlete and a player.

He played for the Atlanta Falcons, the 49ers, the Dallas Cowboys, the Washington Redskins and the Baltimore Ravens, winning the Super Bowl with both the 49ers and the Cowboys.  Sanders was a perennial All-Pro and one of the most feared pass defenders to ever play the game.   While at Dallas - Jerry Jones, Dallas Cowboys owner, president and general manager said of Deon Sanders,  "I think he could be, and you can make a good argument, the best to have played the position. I think it's noteworthy of the impact he made. At one time he had the most touchdowns per touching the ball of anybody in the National Football League. When he got his hands on it, if anybody could, he could take it to the house. I think that's pretty interesting and that's why we made him a receiver when he was here. That's why we started using him on punt returns when he was here as well, just because of his entire career."

I made a promise when I was seven years old to this young woman at the age of 27. She was working two jobs just to see if ends could see one another because they never met. And she was slaving over pots and pans on that precise day. I can remember, it was a little high chair right by the kitchen. In the kitchen there was a high chair right by the stove that she was cooking.

And I said, mama, because I was tired of seeing her go to work and come home all tired. I said I'm going to be rich one day. Mama, “I'm going to make a lot of money, and you will never have to work another day of your life.” My mama said “that's fine, but until then you get that lawnmower and go out there and cut that grass.”

14 years later, that's why you can't give up on your dream, your promise, because 14 years later, this dream, this promise came. That I was able to allow my mama to go into a job and say I'm not doing it anymore. My son has blessed me.

But there is something inside of me, mama, that I never told you. That I never could admit, and I'm going to share it with all of you, because now we're family. I played for a youth team called the Fort Myers Rebels and they blessed me. They took me all over the country to expose me to things, to expose you to things.

Everybody on their team, their parents owned something. Their parents were doctors or lawyers or the chief of police. It was that type of organization. Me and one of my friends were the only African American kids on that team. It was a very affluent team, and I was ashamed of my mama because my mama worked in the hospital. She cleaned up the hospital, and I was ashamed of my mama who sacrificed, who loved me, who protected me, who gave me everything. I want to make sure I was best dressed in school and I had everything that was laid that came out. I had it first.

I was ashamed of my mama because one of my friends in high school, he saw her in a hospital one night pushing a cart, and he came back and he clowned me, he ridiculed me and he mocked me because of my mama.