Labels
Posted by Unknown 8:56 AM

The Pittsburgh Pirates' Honus Wagner, a dead-ball era baseball player who is widely considered to be one of the best players of all time. One of the Hall of Fame's five original inductees in 1936, Honus Wagner combined rare offensive and defensive excellence throughout a 21-year career from 1897 to 1917. 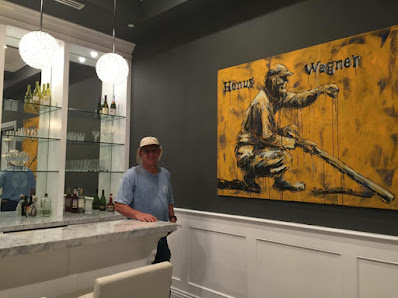 One of my favorite stories about Honus Wagner was told by Burleigh Grimes in The Quotable Baseball Fanatic (2004)  "One day he was batting against a young pitcher who had just come into the league. The catcher was a kid, too. A rookie battery. The pitcher threw Honus a curveball, and he swung at it and missed and fell down on one knee. Looked helpless as a robin. I was kind of surprised, but the guy sitting next to me on the bench poked me in the ribs and said, 'Watch this next one.' Those kids figured they had the old man's weaknesses, you see, and served him up the same dish-as he knew they would. Well, Honus hit a line drive so hard the fence in left field went back and forth for five minutes." 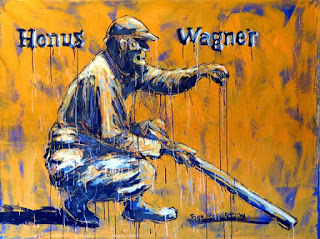 Honus played shortstop and won eight batting titles, tied for the most in National League history,  led
the league in slugging six times.  He said, “I don't make speeches. I let my bat speak for me in the summertime.” He led in stolen bases five times. Wagner was nicknamed "The Flying Dutchman" because he could run the bases so fast – and that he was German.