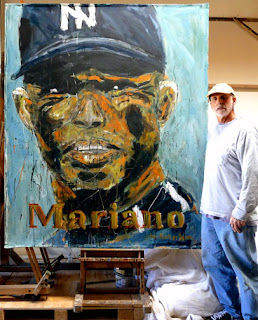 Sports Art painting of Mariano Rivera is 5 feet by 6 feet acrylic on unstretched canvas.  I painted him looking a bit older than he actually is.  Think of it as kind of like a painting where the image gets older but the actual person stays eternally young.  (Somewhat like Dorian Gray without the hedonism.