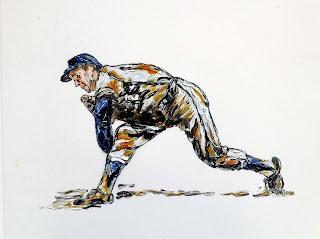 Koufax pitched left-handed. He played his entire Major League Baseball (MLB) career for the Brooklyn/Los Angeles Dodgers, from 1955 to 1966. He retired at the peak of his career, and in 1972

Koufax's had six outstanding seasons from 1961 to 1966, before arthritis in his left elbow ended his career prematurely at age 30. He was named the National League's Most Valuable Player in 1963. He won the 1963, 1965, and 1966 Cy Young Awards by unanimous votes, making him the first 3-time Cy Young winner in baseball history In each of his Cy Young seasons, Koufax won the pitcher's triple crown by leading the NL in wins, strikeouts, and earned run.

Koufax was the first major leaguer to pitch four no-hitters (including the eighth perfect game in baseball history). Despite his comparatively short career, Koufax's 2,396 career strikeouts ranked 7th in history as of his retirement, trailing only Warren Spahn (2,583) among left-handers. Koufax and Nolan Ryan are the only two pitchers inducted into the Hall of Fame who had more strikeouts than innings pitched.