Labels
Posted by What Art Did He Make Today 3:52 PM 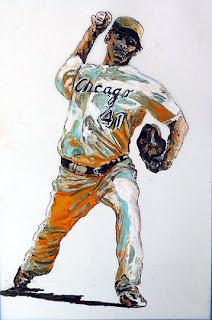 This is a small sports baseball painting of Philip Humber who threw the most recent no-hitter in Major League Baseball. The no-hitter was thrown against the Seattle Mariners on April 21, 2012. Humber recorded a perfect game.
A no-hitter is a baseball game in which one team prevents the other from recording a hit during the entire game.There have been 251 official major league no-hitters, including two in the postseason.
The baseball art is a 14” x 17” oil painting on drafting film. The actual baseball player image on the drafting film is about 10” x 14”.
Labels: Baseball Art baseball image Baseball Painting Baseball Pitcher Chicago White Sox Philip Humber Sports Art