Labels
Posted by What Art Did He Make Today 11:24 AM 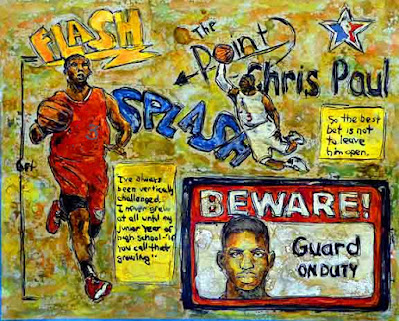 Chris Paul, point guard for the Phoenix Sun is still doing it.  You would think he’d be slowing down just a little bit.  But at thirty-six he is staying ahead of other players the other night by having 23 points  and 16 assists with the Phoenix Suns.  We have to remember as one of the highest-paid athletes in the world, he holds endorsement deals with major companies worldwide.

CP3Nicknamed CP3, he has won the NBA Rookie of the Year Award, an NBA All-Star Game Most Valuable Player Award, two Olympic gold medals, and led the NBA in assists four times and steals a record six times. He has also been selected to eleven NBA All-Star teams, nine All-NBA teams, and nine NBA All-Defensive teams.  I’d say he is holding up, just fine.  You may be wondering how got his nickname CP3.  Chris Paul's family gave him the nickname CP3 because he, his father, and his older brother all share the same initials

About the Basketball Art

The Basketball Art above is a painting of basketball player Chris Paul point guard for the.  Phoenix Suns.   Painting is 12” x 15” on 14” x 17” drafting film.  Watercolor, acrylic and ink.