Labels
Posted by What Art Did He Make Today 5:34 AM 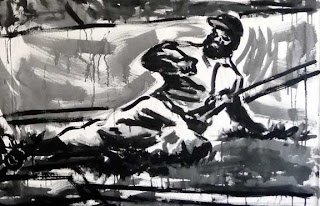 Artist John Robertson Baseball sports painting
of a player sliding into home plate.
5 feet by 2 ½ feet acrylic on unstretched canvas
(painting is a detail from larger painting 5 feet by 8 feet)
Top ten things to think about when stealing base.
A second baseman guarding the base should have the cleat scars he deserves
Caught between two bases go for the one nobody is at.
Get used to the dust.
Hesitating is like a dead cat hunting birds.
If you don’t have two steps on the pitcher – forget it.
Before stealing a base take a pain killer
Hell is trapped between a first and second baseman with a ball.
Always be faster than the ball being thrown.
Getting caught is part of the game.
It is no disgrace in being thrown out – but it should be.