Labels
Posted by What Art Did He Make Today 5:31 AM

Play Well or Sit in the Dugout 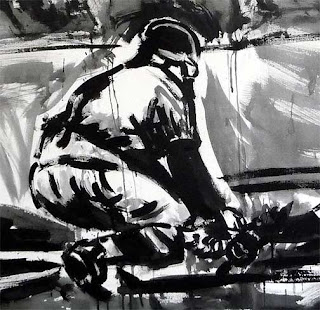 Artist John Robertson Baseball painting of a catcher
5 feet by 2 ½ feet acrylic on unstretched canvas
(painting is a detail from larger painting 5 feet by 8 feet)
When I played in Baseball’s Little League (around 55 years ago) I played catcher. This seemed like the most interesting position to play and still does fascinates me. Although I have painted a few catchers my favorite catcher was/is Yogi Berra. I liked the way he played baseball aggressively. And I liked the non-sensible, or what a lot of people thought were philosophical quotes.
One of the things Yogi said about Little League said "Little League baseball is a good thing ‘cause it keeps the parents off the streets and the kids out of the house." One of my favorites and one of his most famous quote was what Yogi said after Mickey Mantle and Roger Maris hit back-to-back home runs . Yogi said, It’s déjà vu all over again." And another favorite of mine is apropos to my age (I’m in my sixties) Yogi said." The future ain’t what it used to be."