Labels
Posted by What Art Did He Make Today 4:33 AM

The Skateboard Deck was done for a donation for a fundraiser to support 18th Street Project/Arts Center in Santa Monica CA. The main image on the board is of Jeff Ho one of the original Z-Boys. (see original portrait below) Z-Boys were a group of skateboarders in the 1970's from South Santa Monica and Venice California who are credited with inventing modern skateboarding. Jeff comes by a neighbor’s house in Venice, CA so I asked if he would let me paint his portrait. Z-Boys were profiled in the documentary film, Dogtown and Z-Boys. 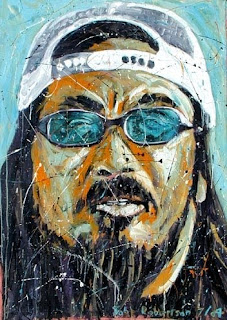