Labels
Posted by What Art Did He Make Today 11:24 AM

A Cool Brees Forcasted for the Super Bowl in Miami 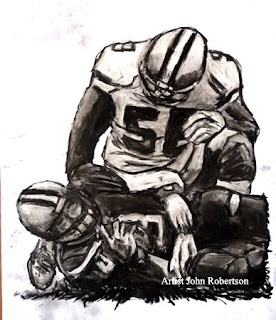 Regardless of the Score or Situation Drew Brees Exudes Leadership
If I made sixty million dollars for six years to play football for the New Orleans Saints and was starting to run out of time, the last position I would want to play is quarterback - even if I was Drew Brees playing in the Super Bowl XLIV on Sunday. I would like to keep my teeth and legs in one piece. You would not find me walking onto a field and saying to guys like, Indianapolis Colts’ tandem defensive ends, Dwight Freeney (who will probably start) and Robert Mathis, "I’m standing here. Catch me if you can." Because they can catch me – I would not want to walk away from each football game having to ice my whole body. There are easier ways to make ten million dollars a year.
I fully understand guys that take the money and run. But Brees just stands in that pocket – waiting. Drew waits like some hunter waiting for a charging elephant to get close enough before firing off a shot. Me? I’d be out of that pocket so fast. I am not hanging around for that three hundred and twelve pounds of the Colts Defensive Tackle Daniel Muir to come plowing through the Saints’s line. No way.
I would not assume that middle linebacker Gary Brackett is too small to be effective. You may not know this – although the male lion is larger and is the king, it is the lioness that eats first. Brackett has the same great instincts and is "hard-nosed" enough to dominate – whether it is blitzing or covering a receiver he can intimidate a quarterback.
There are safer activities than playing quarterback in the NFL – jumping off a bridge with a big rubber band tied to your ankles or free climbing the face of El Capitán (look mom, no rope) - There must be a better way to finish off the last couple of years of the sixty million dollar contract. If it were me I’d want to be on the sidelines sending in hand signals to a back-up quarterback or, if I must be in the game I’d like to be the placekick holder.
Why is Drew Brees out on the field taking the hits? He likes to throw a football. It is what he is about. Runners run. Kickers kick. Fighters fight. Quarterbacks throw. Brees leads, others follow. I watch.
Labels: charcoal drawing Football Art football drawing Football image image football art Image sports art Sports Artist John Robertson