Labels
Posted by What Art Did He Make Today 3:56 PM 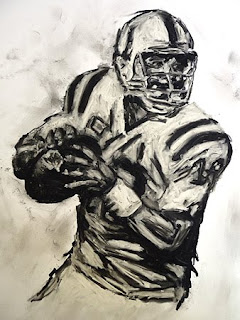 Peyton Manning is taking his game to Miami – back to the future for Super Bowl 44 – the All-American quarterback with the whole shebang. Four times NFL Most Valuable Player. Sporting News named Peyton in 2009 the number one player in football. Fox Sports also named him the best player of the last decade. He could not be anything else but the best. He radiates leadership and mythic appearance.
In college Manning won the Johnny Unitas Award. And where does Peyton end up playing? With the Indianapolis Colts who had a notable history with that great quarterback. If Unitas was "the man with the golden arm" then Peyton is "the man with the platinum arm." In the future there will be a "Peyton Manning Award" for quarterbacks.
If you wanted a quarterback for a commercial your first choice would be Peyton. Most athletes are stiff as Astro-Turf and unsuitable for anything more than sponsoring used cars. But Manning is perfect for the role of an athlete. Both on and off the field he has great, deadpan timing. His expressionless, cat-like manner gives him control of the line of scrimmage, he reads the defense like a lion on a hunt, and his pass release devours the opposition.
If the technology industry were building a football robot, they would use Peyton Manning as the model. The passing machine would be six feet, five inches high and weight two hundred and thirty pounds. The right arm would be a shotgun and the brain would be run by G10 technology – the all-pro model.
Can the great, the future great Peyton Manning take his team to another Super Bowl win? 2007 was the last time for the Colts. The Saints have never been there. So what happens depends on the New Orleans Saints and who decides to show up for the game. Peyton will be there with his shotgun arm, and the All-Pro G10 brain. With Manning there are no odds to defy. They are always in his favor. Every game he plays in he expects to win.
Labels: Artist John Robertson Baseball Art image football art Image sports art Indianapolis Colts Johnny Unitas New Orleans Saints Peyton Manning Sports Art Sports Artist John Robertson Super Bowl 44