Labels
Posted by What Art Did He Make Today 4:49 AM

Brett Favre Has Back-Stepped Comfortably Into the Pocket with Minnesota 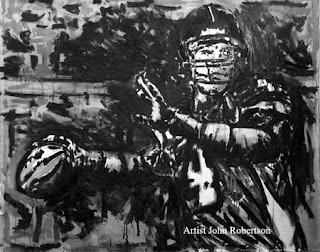 This football painting of Minnesota Vikings Quarterback Brett Favre is 6 feet by 5 feet, acrylic on unstretched canvas. Football Art by Artist John Robertson
We can identify football heroes by the number on their back. The Minnesota Vikings may be playing a team sport but number 4 is their hero. Brett Favre led Minnesota to finish the regular football season with a 12-4 record. And with their home-field advantage the Vikings embarrassed Dallas Cowboys with a 34 –3 rout. "I know we're not done yet," Favre said after throwing four touchdown passes in last Sunday’s game. "The New Orleans Saints, they're explosive."

We do not know what would have happened if the Vikings had not paid Favre what seemed to be a foolish price of $12 million dollars for the season. But heroes are not cheap. They are skilled and superior. So, if you are running a football team and someone says to you that they have an old quarterback who has played for nineteen years and has started 289 consecutive times and is in condition and willing to play – and you don’t think you should spend the money – think again. The detractors did come out after a couple of tough losses. But, not only did Favre have a good season – he is having one of his best - and at the age of 40. For those who like heroes it is not a complicated story.
For most of the season Vikings fans have been dancing in the streets. But Favre is not invincible or ultimately indestructible. When Favre is on target - damage to the opposition. When he is off – oops! And he has had a couple of those games – witness the 30-to-17 loss to the Cardinals.
Favre is not looking to end his career going gently into the night. That was not an idle chat he had with coach Brad Childress during that Panthers game. Those nineteen years of experience says, "keep me in coach!" And after the loss to the Bears he came gunning back and blasted the visiting New York Giants 44-7 and last Sunday, the Dallas Cowboys. On a white horse, Favre wants to lead the charge in the NFC Championship game against the New Orleans Saints.
The elder Favre was a cult hero in Green Bay. After this season he certainly has his followers in Minnesota. We love leaders. We love heroes. We will see him in New Orleans. And if we do not see our hero in the Super Bowl we may see him again, for the last time in the Pro Bowl. It will be Favre's eleventh.