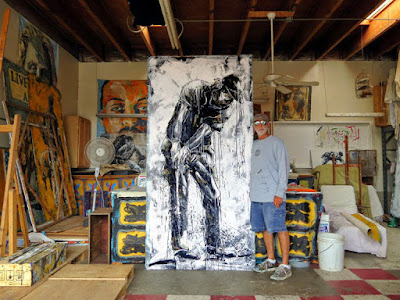 
Why did I create a piece of art showing Phil Mickelson, that great PGA champion.  First, he is left handed – and so am I.  Second, well, as Phil is one of the great golfers of all time it seemed appropriate that I paint him.  He is bigger than life.  The golf painting is 4 ft. x 8 ft, acrylic on unstretched canvas.

My Fleeting Experience with Golf


When I got out of the Navy I got a job at a golf driving range picking up golf balls.  The fun part of the job was watching a golf hustler, who hung out at the driving range, hustling customers with his trick shots.  He was about 5 feet 4 inches tall, and had to be over two hundred pounds.  He wore crazy colored golf shorts and was as hairy as a fat, brown bear.  I found a mentor.

I saw him outdrive people with a shovel and a rake.  I saw him make a bet with a guy that he could stand on one picnic bench, tee up a golf ball on another picnic bench (he put the tee between the crack between the two strip of wood on the bench) and with his favorite garden rake, drive the ball off the bench over 175 yards and hit the target out on the range.  I saw him stand on one side of the golf shack and with a garden hoe, pitch the ball blindly over the shack and come within ten feet of the 75 yard target. I saw him pocket a lot of money.  The owner said when he came around, chase him off.  But the owner was seldom there and I was mentored and entertained.  Also, as the saying goes, "don't poke the bear."


The golf range land was leased from the Federal Government and after about a year of working there the government cancelled the range owner's lease,  (something to do with not paying his rent) took back the land and eventually built a whole Federal Government Complex in Westwood - the .  And there went my interest and success in a golfing career.